The recent Canadian stagnant economic growth has led to many layoffs especially in the resource industry (crude oil, natural gas, mining, transportation). This has motivated current graduate students of universities and colleges to stay longer for another degree or recent unemployed workers to obtain an education in the form of another degree in the hopes of being more competitive in the workforce. However, government funding shortfall has limited university and college growth and has laid to layoffs of faculty and staff especially at the college level.

The primary activities in the university and college space are to provide higher education to students in the hopes that students will obtain a bachelor’s degree (36.0%), master’s degree (8.0%), doctorate degree (2.5%), professional degree (8.5%) or college certification and degree (35.0%). 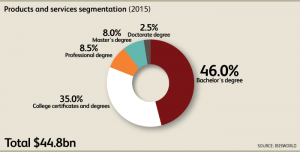 Bachelor’s degree accounts for 46.0% of graduates takes three to five years to complete with the average duration being four years of studying as a full time student with some schools especially in the US requiring entrance examinations such as SAT or ACT in addition to a high school diploma.

College certificates and associates degree accounts for 35.0% of graduate students ranging in duration from less than a year to more than two years with an emphasis on student employability.

Master’s degree accounts for 8.0% of graduates with a bachelor’s degree requirement ranging in duration from one to two years of full time study. Master’s degree earned by students has increased in the past due to the popularity of master of business administration (MBA) degree.

Doctorate degree accounts for 2.5% of graduates is the highest degree possible requiring mastery of a field and an independent research project resulting in a thesis. The program requires a minimum of a bachelor’s degree with study duration ranging from three years to over six years depending on the program. Enrolment is expected to increase in the future as dampening job prospects force students to go back to school. 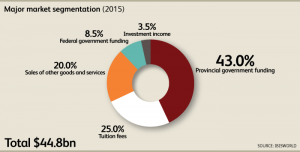 Canadian students make up the market majority of students in universities and colleges through tuition payment with other income sources such as provincial and federal government funding making up over 50% of revenue through government grants. With the annual decrease in government funding within the past five years, universities and colleges needed to offset the revenue loss through tuition increases as well as decreasing expenses such as program budget cuts. At the University of British Columbia, a tuition increase of about 40% for international students over 3 years has been proposed accelerated by the rapid decrease in Canadian currency within the past year. 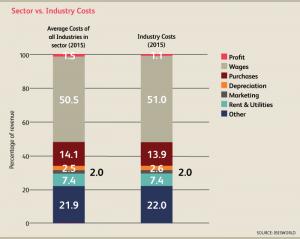 If we look at the revenue breakdown of the university and college industry, the profit (revenue – expenses) is very small at 1.1% in 2015 and is on a declining trend. Wages make up 51.0% of costs due to teaching being very labor intensive as well as needing administrative and maintenance staff. As the university recruits more students, more faculty and staff needed to be hired which is typical of service industries. To offset the government grant declines, many universities and colleges have implemented salary freezes and early/voluntary retirement programs so wages are on a declining trend over the next five years.