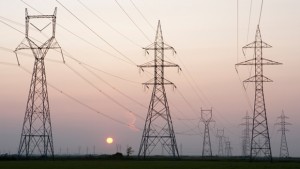 The Canadian electric power transmission industry stores and transmits electricity produced from combustion, conventional steam, hydro power, nuclear and wind facilities and power plants to consumers and other utilities. Industry operators manage a sophisticated distribution and transmission network of interconnected provincial grids consisting of the Eastern grid, Quebec grid and Western grid. High regulation and inelasticity of demand of electricity prevent rapid fluctuations in revenue with industry performance closely tied to provincial regulated electricity prices. Revenue growth over the next five years to 2020 is expected to reach $68.3 billion from the current level of $59.9 billion at an annualized rate of 2.7% due to increased electricity demand from population growth and industrial production.

Utilization of industry capacity measures the actual industry output to potential full capacity output ratio and is a key driver of electricity demand. As electricity consumption increases within a population area, the utilization rate increases such as in 2015.

Hydro-Quebec, a crown corporation owned by the Quebec government controls 22.9% of the market and operates within the province of Quebec with a monopoly. Approximately 99% of the energy produced by the company is biomass, hydro power or wind power.

Hydro One Inc, a crown corporation who recently debuted on the stock market after the Ontario government sold a portion of the company holdings, controls 11.1% of the market and operates within the Ontario province with monopolistic power. It owns most of Ontario’s distribution and transmission business segment.

BC Hydro, a BC government crown corporation controls 6.9% of the Canadian market. It controls 95% of the BC electricity market by population and produces energy through its hydroelectricity facilities and thermal power plants using fossil fuel and serves part of the US Washington state across the border.

Hydro power accounts for 63.4% of electricity generated and is the main source of energy generation in British Columbia, Labrador, Manitoba, Newfoundland, Quebec, and Yukon due to being close to water sources such as lakes and river systems.

Nuclear accounts for 15.9% of electricity generated and is the main source of energy generation in Ontario where the majority of the twenty two nuclear reactors of which seventeen are commercially operational are located.

Other consists of internal combustion, solar, tidal, turbine and wind and accounts for less than 7% of electricity produced. The Canadian government continues to invest in renewable energy including solar and wind energy so energy from these renewable resources will continue to increase in the near future.

Industrial sector consisting of industry operations and manufacturing accounts for 39.0% of market revenue as electricity is required for production of goods from simple everyday items to heavy industrial machinery. Demand for electricity from this sector is highly correlated with the Canadian and US economy such that any economic slowdown will reduce energy consumption in this market segment.

Residential households accounts for 29.0% of market revenue. Electricity is a necessary good with inelastic demand so electricity consumption is fairly stable year over year with marginal annual increases of 1.1%.

Commercial and institutional sector ranging from shop owners to mall and office operators accounts of 26.0% of market revenue. Electricity demand is correlated with the economy with an economic boom increasing usage of air conditioning and heating with business expansion and a decrease of electricity usage in an economic downturn due to business and public facilities reducing operating hours by scaling down or even closing the business. 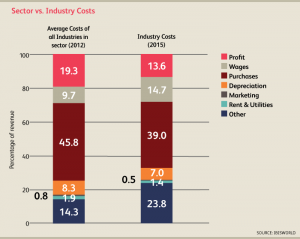 Profit has reduced over the past five years from 14.6% of revenue in 2010 to 13.6% of revenue in 2015 due to increased capital expenditures in order to upgrade, expand, maintain and repair infrastructure. Large operators with an economics of scale have weathered much of the profit decrease by increasing their top line revenue.

Wages make up 14.7% of revenue as highly paid skilled labor ranging from electricians, engineers, and other technical hires is required for maintenance services and power grid management.

Purchases account for the highest cost of revenue at 39.0% due to the industry being capital intensive from investments in transmission infrastructure as well as purchasing electricity from electricity generators and wholesalers.