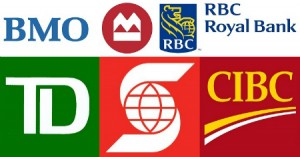 Banks use the deposits accepted from customers and loan them out as commercial, consumer or industrial loans to retail and business clients. The Canadian banking system is highly regulated including the Office of the Superintendent of Financial Institutions. The major players in this industry are known as the big five banks who make up 86.8% of the market.

The Canadian commercial banking sector earned $56.8 billion in 2015 at an annual growth of 0.9% from 2010-2015 and an anticipated revenue growth of 1.6% annually from 2015-2020. Canadian banks have performed fairly well reaching record profits leading up to 2015. Banks make money from the difference between the lending rate and the borrowing rate and the volume of transactions taking place.

In 2015, the brief recession in the Canadian economy has motivated the Bank of Canada to lower overnight interest rates from 1% in 0.25 increments to 0.5%. This has decreased the bank’s profit margin on loans although not all of the savings from reduced interest payment to depositors are passed onto borrowers. To make up the revenue shortfall earned from loans, banks have taken to introducing extra fees for banking services. Moreover, the access household debt which has reached $1.64 for every dollar of disposable income will at some point in the near future lead to deleveraging and a decrease in profits and profit margins for banks.

Royal Bank of Canada controls 23.5% of the Canadian market share which make up 64% revenue of its $34.1 billion of its operations globally.

Canadian Imperial Bank of Commerce or commonly known as CIBC controls 16.4% of the Canadian market share which make up 63.4% of its 2014 $13.4 billion total revenue.

Bank of Montreal controls 11.9% of the Canadian market share which make up 38.9% of its $16.7 billion total global revenue.

Key external drivers of the industry

Aggregate household debt reflects the appetite for more loans from consumers. When consumers lend more money from the bank, the bank’s profits increases because of increases in lending volume. In 2015, loan activity and household debt is expected to increase which provides a tailwind for the industry. 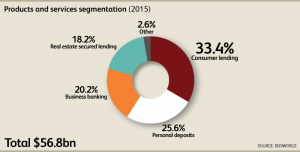 33.4% consumer lending which includes auto loans, home equity loans, and lines of credit. As consumer deleveraging is anticipated to take place sometime over the next five years, consumer lending revenue is expected to decline.

25.6% personal deposits which includes checking and savings, deposit certificates, and money market savings. Deposits give banks access to funds to lend out as well as charge various fees ranging from account maintenance to overdraft fees. Deposits have expanded in recent years due to the acquisition of small banks.

20.2% business banking which consists of a majority share of commercial and industrial mortgages and minority share of small business loans and deposits. 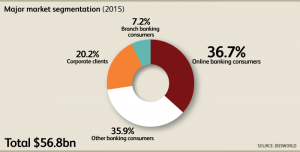 Banks deal with a variety of consumers and clients which consists of 79.8% personal clients made up of online banking, branch banking and other banking consumers and 20.2% corporate clients dealing with commercial and industrial mortgages, deposits, and lines of credit . 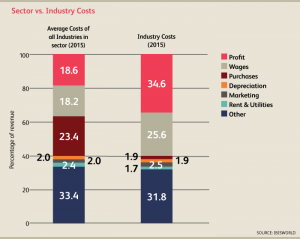 Profit: Profits increased from 25.7% in 2010 to 34.6% in 2015 due to a reduction in interest expense and reduction in allowance for loan losses. This Canadian economy which fared well in the 2008 recession allowed the banks to have lower loan write offs. From 2015-2020, increased regulation as well as larger loan defaults and loan losses from the rapid commodity price drop is expected to dampen profits going forward.

Wages: Wages account for 25.6% of industry revenue and skilled labor costs to hire, motivate and retain talent from analysts to customer service representatives make up the largest portion of industry costs.